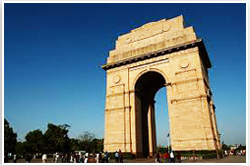 Day 01: New Delhi (ARRIVAL): Welcome to India!!! On your arrival at Delhi international airport you will by representative of Western India Nature Tours and transferred to your hotel. At New Delhi, evening to be used in shopping and visiting the local bazaars. Night stay at your hotel.

Day 02 : Delhi –  Jaipur (250km)
After breakfast continue towards Jaipur and reach by lunch-time and check into hotel. After lunch set off to see the Pink city visiting the observatory Jantar Mantar built in 1727 by Sawai Maharaja Jai Singh II who was a mathematician , an astronomer an astrologer and a great musician of his era. He built five observatories throughout India – Jaipur, Ujjain, Varanasi, Mathura and Delhi but only the one at Jaipur is functional. Then visit the City Palace of the Maharaja of Jaipur with a fabulous collection of robes and saris in cotton and silk with gold latticed work. The City Palace houses a collection of paintings also in the painting gallery and of course a collection of arms and ammunitions in the ammunition gallery. Later visit the Birla Temple which is a great piece of work in marble.

Day  03 : Jaipur
In the morning take a short visit to the Hawa Mahal (Wind Palace) and later proceed to the Amber fort which displays a beautiful mix of Mughal and Rajput styles of architecture.; take an elephant ride at the Amber fort. See the marvelous Sheesh mahal built in the 17th century in a fusion style of Hindu and Islamic art. Also see the hall of public audiences and Maharaja Man Singh’s Palace who had twelve queens. Enrooted visit Water Palace which was a resting place for the kings in past. In the evening enjoy a cinema in Asia's Second Best Cinema - a highly recommended place. Later you can enjoy a Dinner in a typical Indian Restaurant with Folk Dances by Gypsy women.

Day 04 : Jaipur – Fatehpur Sikri – Agra(232Kms)
Leave Jaipur after breakfast, On the way visit Galta Sun Temple which is a beautiful place surrounded by mountains, the temple is also known as Monkey temple, Here you can find a lot of monkeys who are friendly and doesn't harm. Later you can visit the ornithological reserve at Bharatpur – Keoladev National Park. See the varied varieties of birds and animals during your tour inside the park. This is the only National Park where you get to see the rare species of the Siberian Crane during winter season. After lunch continue towards Fatehpur Sikri the Phantom city. Visit this abandoned city built by the Mughal emperor Akbar in the second half of the 16th century. Fatehpur Sikri was built by Akbar after his Hindu wife bore him the long awaited son who was born after the renowned sufi saint Salim Chisti blessed Jodhabai Akbar’s Hindu wife with a son. Also visit Jodhabai’s palace the biggest palace in Fatehpur Sikri even bigger than the emperor’s palace himself as this was the queen who bore him his heir to the throne. Continue towards Agra and reach Agra and then see the Agra Fort built by Akbar where Shahjahan’s own son Aurangzeb imprisoned Shahjahan. Late relax at your hotel or go to the local bazaar to see the lifestyle of the people.

Day 05 : Agra - Delhi (220 km)
Taj Mahal - The 7th Wonder of the World is awaiting your arrival today morning. A must see with the rising sun as the Taj Mahal is bathed in the golden rays of the morning sun. Built by Shah Jahan, the Taj is a white marble memorial that houses the tomb of his beautiful wife Mumtaz Mahal. This monument took 22 years to be completed and was designed, and planned by Persian architect Ustad Isa. Apart from its stunning design, balance and perfect symmetry, the Taj is also noted particularly for its elegant domes, intricately carved screens and some of the best inlay work ever seen anywhere in the world. Upon Arrival in Delhi, You can visit Sikh Temple or you can walk around the Connaught Place Markets or Janpath. Take a dinner in the restaurants at this center of the city.

Day 06 : Delhi - Kathmandu (By flight)
In the morning take a leisurely breakfast, Later take a flight to Kathmandu (Nepal), At airport you will be received by Driver, Later move around Thamel Markets and rest of the day for your leisure.

Day 07 : Kathmandu
Early Morning at 06:30, Take a Flight to Everest to fly above the top of the world - the mighty Himalaya! You will be awe inspired by the majestic 8000 meter snow capped peaks flying over the top of the world. Later after breakfast, move out to an touristy city tour which includes Boudhanath Temples, Pashupatinath Temples - one of the holiest Hindu temples in Nepal. Later move out to visit Kathmandu Durbar Square, Patan Durbar Square and Swayambhunath Temples. Boudhanath: one of the largest Buddhist stupas in the world, Boudhanath is built around a plinth resembling the holy Mandala. Rest of the day is at your leisuere.

Day 08 : Kathmandu - Baktapur - Nagarkot - Kathmandu
Morning drive to visit the city of Bhaktapur. Founded in the 9th century, the city is traffic free, lined with cobblestone streets linking temples, monastery courtyards and monumental squares. Also climb in altitude to the village of Nagarkot, lying at 7200 feet above sea level, you will be dazzled with a view that encompasses 200 miles of snow capped peaks stretching across the Himalaya range - simply breathtaking!. Evening back to Kathmandu and overnight in Hotel.

Day 09 : Kathmandu - Delhi (By flight)
In the morning, take a leisurely breakfast, Later take a flight to Delhi, Upon Arrival in Delhi, You can visit Sikh Temple or you can walk around the Connaught Place Markets or Janpath. Take a dinner in the restaurants at this center of the city. You will be transferred to the International Airport, 3 hours before your International Flight time for your further journey back to your country. Departure concludes with happy memories of your India and Nepal Tour.