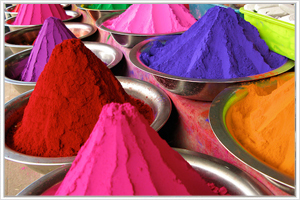 Holi is the most lively of all Hindu festivals,  observed all over North India, which falls on the full moon day in the month of Phalgun  (March) according to the Hindu calendar. It heralds the end of the winter and the beginning of the spring and marks the rekindling of the spirit of life. It is a festival of joy when all is forgiven and it is a time to break free from the shackles of convention and let ourselves go. Holi provides a refreshing respite from the mundane norms as people from all walks of life enjoy themselves. In a tight knit community, it also provides a good excuse for letting off some steam and settling old scores, without causing physical injury.

Holy is associated with a legendry encounter between Hiranyakashyapu, a powerful demon king and his son Prahlad. Hiranyakashyapu who had gained victory over gods in a war had forbidden his subjects from worshipping gods. But his son Prahlad who was a ardent devotee of Vishnu, refused to obey his orders. Hiranyakashyapu had a sister, Holika, who was blessed with special powers-fire could not burn her. Hiranyakashyapu ordered Holika to take Prahlad in her lap and mount a burning pyre. She did so, but Prahlad came out unscathed while Holika was reduced to ashes. It is said that Holi is celebrated and Holi fires lit in remembrance of this miracle.

DESCRIPTION
Holi festival may be celebrated with various names and people of different states might be following different traditions. But, what makes Holi so unique and special is the spirit of it which remains the same throughout the country and even across the globe, wherever it is celebrated. The night before full moon, crowds of people gather together and light huge bonfires to burn the residual dried leaves and twigs of the winter. People throw coloured powders at each other and make merry. People, young and old are drenched with colours being poured from atop the houses, bursting balloons, or long pistons. Singing and dancing add to the gaiety of the occasion.
Preparations for the festival begin a week ahead. Houses are given a fresh coat of color, beautiful floral designs are drawn at the entrance and colours bought. In earlier days the colors were extracted from a flower that blossoms only during this festival and the pistons were made of bamboo sticks. But over the years colors are made artificially and pistons made of different materials are available in various designs. In villages, powders made of rice flour mixed with turmeric and bamboo poles are still used. Special delicacies such as malpua and other delicacies are prepared on this day, which vary from region to region.
On ‘Holi’, mothers let their children go out on the streets to indulge in the splashing of colors. Men like to wear white ‘Kurtas’ while ladies prefer to wear white saris, or ‘Salwar Khameez,’ on 'Holi'. One thing that is very attractive about this festival is the spirit of the people who celebrate the occasion. Whether they are young or old, all the people are lost in the joyful occasion, having fun throwing colors at each other. Even water balloons would be thrown at each other. When they splash colored water on passer-bys, it is common for the passer-bys to get involved in the color riots themselves. Even kids love this festival, as they enjoy being drenched in colored water. On this happy occasion, dances and folk songs are also important features in the festival.
Mathura (Uttar Pradesh) and the small towns of 'Braj Bhoomi (Land of Lord Sri Krishna) celebrates the joyful rasaleela of Krishna and gopis during Holi.  Especially famous is the Lathmaar Holi of Barsana and Nandgaon. In Anandpur Sahib (Punjab), Sikhs celebrate a special festival 'Hola Mohalla' on the day after Holi. It marks a display of ancient martial arts and mock battles.

TIME TO CELEBRATE
. The festival is celebrated in March.