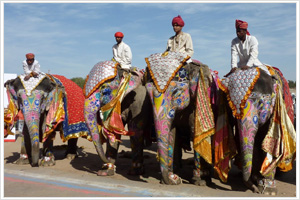 The Elephant Festival is an inimitable event held annually in Jaipur. Groomed flawlessly, rows of elephants do a catwalk before an enthralled audience liked best fashion models to make this festival an amazing one. The elephants move with poise in pageant, run races, play the regal game of polo, and finally participate in the spring festival of Holi. It is festival time with elephants typically celebrated one day before the Holi, Indian festival of colours.

Staged at Jaipur Chaugan Stadium elephants put up a variety programme and the arena is brought alive with musician and dancer. The crowd, which includes sizable presences of foreign and Indian tourist, electrify the atmosphere. The festival starts with an impressive procession of the majestic animals lovingly painted and tastefully attired with glittering ornaments and embroidered velvets. There are deadly and fierce elephant fights.

ceremonial procession is recreated with caparisoned elephants, lancers on horses, chariots, camels, cannons, and palanquins. Elephant is the centre of attraction in the many races and beauty pageants.

Most of the participants are female elephants. The mahouts (elephant keepers) take great care to decorate the elephants painting their trunks, foreheads, and feet with floral motifs and adorning them from tusk to tail with interesting trinkets. Female elephants wear anklets with and make music as they walk.The game of polo forms the highlight of the festival. Dressed in saffron and red turbans, the teams try to score goals with long sticks and a plastic football.

Finally, the tourists are invited to mount the elephants and play Holi. Participants dance with great vigour and the excitement rising to a crescendo.

The Rajput kings had extraordinary implication for elephants not only during war but also during the royal festivities-a must at royal pageant. Nishan-ka-hathi, the flag bearer, led the procession. The king always mounted a caparisoned elephant. Special hunting programs and elephant fights were organized to entertain the royal guests. Jaipur was a favourite spot with the important personalities of the British Raj and the Maharajas always arranged for their guests of honour elephant rides up to the Amber palace. Even today, the mahouts take tourists up to the Amber Palace on elephant back like shuttle taxis.

Rajasthan Tourism revitalized the ritual by including the Elephant Festival in the cultural calendar. The present-day pageant, originated only a decade ago, was worked out especially with the tourist in mind. The inclusion of the game of polo is more recent, being inspired by a cartoon in Punch magazine that showed the Indian polo team atop an elephant after it won all the international tournaments. Every year on Holi, the old stadium at Jaipur, the Chaugan (originally planned for elephants), makes the setting for a stunning fete.

A magnificent spectactle, it unveils the majesty and grandeur of elephants celebrated around Holi. The Mahavats or owners proudly decorate their elephants with bright colours, jhool., (saddle cloth) and heavy jewellary. A royal procession of decorated elephants, a match of elephant polo, an elephant race and playing Holi on elephants are main events.