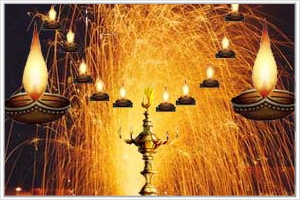 India is the land of festivals but Diwali is one of the few grandest Indian festival celebrated all over India with equal enthusiasm and zeal. Diwali Festival is the abbreviation of the Sanskrit word 'Deepavali', which means 'rows of lights’. It s a beautiful festival of Hindus. Celebrated 21 days after Dussehra, it marks the return of Lord Rama (Hero of the epic Ramayana) to Ayodhya after his 14 years exile. Thousands of traditional clay lamps are lit in houses all over the country.

Diwali is celebrated mainly for Rama's homecoming to Ayodhya after defeating Ravana and his coronation as king. The festival marks his victorious return to his kingdom along with his wife Sita, brother Laxman and great devotee Hanuman. The legend claimed that it took 20 days for Rama to return to his kingdom after defeating Ravana. The people of Ayodhya lit up their homes with oil lamps and turned the night with a light festival. From that time onwards Diwali is being celebrated to mark the Victory of Lord Ram over the evil Ravana.
Another legend said that, on this day Mother Lakshmi emerged from the ocean of milk (Kheer Sagar). She brought with her wealth and prosperity for mankind. On that day, Lakshmi Pooja was performed to honour Goddess Lakshmi.
Another legend said that, in this day of Diwali, a small boy called Nachiketa who always believed that Yam, the god of Death was as black as the dark night of amavasya. But when he met Yamraj, he was quite astonished with Yamraj's calm and stature. Yam explained to Nachiketa on this Diwali day of amavasya that by only passing through the darkness of death, man sees the light of highest wisdom and then only his soul can escape from the bondage of his mortal frame to mingle with the Supreme Power. And then Nachiketa realized the importance of worldly life and significance of death. Then he whole-heartedly participated in Diwali celebrations.

Another legend said that once upon a time King Bali of the nether world mighty power had become a threat to the gods. In order to give him a lesson Lord Vishnu in the guise of a Batu Waman- a small boy- visited his kingdom. In that time King Bali was much more famous for his philanthropist cause. Keeping this in mind Lord Vishnu begged King Bali to give him only that much land which he could cover with his three steps. King Bali proudly granted Lord Vishnu’s wish. With his first step Lord Vishnu covered the entire heaven and with the second step the earth and asked Bali where to keep his third step. Bali offered his head. Putting his foot on his head Vishnu pushed him down to the underworld. In that time Lord Vishnu gave him the lamp of knowledge and allowed him to return to earth once a year to light millions of lamps to dispel the darkness and ignorance of humanity and spread the radiance of eternity and love. On this day people also worshipped Goddess Lakshmi as she was freed by Vishnu from the clutches of King Bali. Therefore, it is believed that the festival is celebrated in honour of Mother Laxmi.

DESCRIPTION
Diwali is celebrated for five days. Each day dedicated to a special thought. First day - Dhanteras or Dhantrayadashi is celebrated in favour of goddess Lakshmi. Poojas are performed and devotional songs are sung in praise of the goddess. Small foot steps are made with rice flour and vermilion powder on the floors of the houses depicting the arrival of the goddess. Earthen lamps filled with oil having cotton wicks are arranged in neat rows along the walls and parapets in the verandahs.  These lamps are lit in the evening and kept throughout the night. Glittering lights are a splendid spectacle.
Second day the Narka - Chaturdashi or Choti Diwal, the celebrations are based on a legend of the killing of the Naraka Asura by Lord Krishna. Traditional early baths with oil are made and kumkums are applied on their foreheads. The following days Goddess Kali is worshipped, books are worshipped in a special ceremony, old accounts are settled and new ones are opened and the legend of the Asura king Bali is remembered.  On Diwali day, delicious sweets are prepared and exchanged among friends and relatives.
Celebrated with vigour and gaiety by people of every religion Deepavali, its magical and radiant touch creates an atmosphere of joy and festivity. Innumerable lamps are lit on the roofs and windowsills of the houses, thus, giving an ethereal and almost divine look to the whole scenario. It is said that Lakshmi, Goddess of wealth roams the earth on this day and enters the house that is pure, clean and brightly illuminated. Young and old, men and women, all dress up in new clothes and buy new utensils on this day. They worship the deities, Lakshmi and Ganesha, and share sweets and gifts with their relatives and friends. It is also the beginning of the new financial year for the business community. However, it is the crackers and the fireworks that attract the kids the most and form the highlight of the festival. Deepawali symbolises the victory of righteousness and the lifting of spiritual darkness. It is the celebartion of victory of good over evil - and the glory of light.

TIME TO CELEBRATE
The festival is celebrated in October.