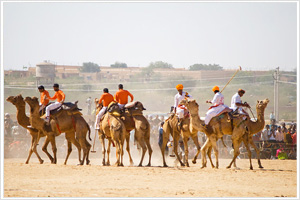 Camel, 'the ship of the desert', has been an integral part in the life of the people of Rajasthan, since time unknown. To honor this wonderful creature, Rajasthan celebrates the Camel Festival every year at Bikaner. The Camel Festival is an event organized in Bikaner by the Department of Tourism, Art and Culture, Government of Rajasthan, every year in the month of January. Camels fascinate tourists from all over the world with their movements, charm and grace. A spectacle of unusual camel performances: camel races, camel dances, and the bumpy, neck-shaking camel rides.

Situated in the heart of the desert belt, Bikaner was always an inaccessible land. Before the advent of modern motor vehicles, the survival of the people of this region depended on the 'Ship of the desert' - the Camel. The camels of this region were famous for their endurance as well as their strength and beauty. In fact, the Bikaner army had an elite camel corps called the Ganga Risala which took active part in both the World Wars. The Ganga Risala was a Camel unit in the army even after the independence and it took part in Indo-Pak wars. Bikaner also boasts of the only Camel breeding center in India. Camel can still be seen pulling heavy loads on carts in this region. With such a long association with Camels, it is but natural that the Department of Tourism, Art and Culture chose to hold the Camel festival in Bikaner.

The Camel festival starts with the procession of beautifully decorated camels. The procession heads towards the open sand grounds. Here, the festivities begin in earnest. The Camel Pageant is held on the first day wherein the camel owners show off their Camels' decorations and jewellery. Camel dance performances are also held. A competition for best decorated camel, fur cutting design, camel milking and the best camel hair cut is organized The camels display amazing footwork, dancing gracefully to the slightest direction of their drivers. Colourful bridles, be jewelled necks, jingling anklets and long, lanky camel shadows on dusky sands, cast a magical spell.

The amazing foot movements and dancing performances of camels here cast a magical spell on the spectators. Cultural performances of folk dances and music add to the pageantry of the Camel Festival. In this festival tea and sweets prepared by camel milk are made available to the visitors interested in enjoying them.

On the second day, the fleetest camels of the region take part in the camel races. The competition is fierce as the best camels vie for the honors. Thousands of excited tourists and locals cheer the favorites. On both days, the evening ends with a rendezvous with the renowned folk artists of Rajasthan. The jubilant, skirt swirling dances, the awe inspiring fire dances and many other equally interesting performances entertain the visitors. The grand finale is a magnificent display of fireworks which illuminates the desert city of Bikaner.